Harvey Weinstein, exposed serial rapist and fallen pillar of Hollywood, isn’t even the tip of the iceberg. To see how dark and depraved the culture of Hollywood really is, just ask former child star Corey Feldman what his childhood was like.

One of the most outspoken voices regarding Hollywood’s “other open secret” — systematic pedophilia — Feldman is now attempting to crowd-fund a film about his life story to expose truths that, if realized in full, would probably make even the vile Weinstein debacle look tame in comparison. In making this biopic, he hopes he can inspire some of the countless others he knows to have been victimized to come forward and bring light to this darkness once and for all.

Feldman is trying to raise a flexible goal of $10 million for the project. According to a video Feldman released, a tired looking and bleary-eyed Feldman describes the alleged ways his life has gone into total disarray since announcing he had a plan in the works to expose organized pedophilia in Hollywood.

In addition to a brush with the law involving marijuana posession, his video and the text on his IndieGoGo page claim that multiple vehicles have tried to run him down as he walked down the street. He also says his band, Corey Feldman & the Angels, has disbanded due to safety concerns.

Below are a series of recent tweets he posted, hinting at an upcoming plan: 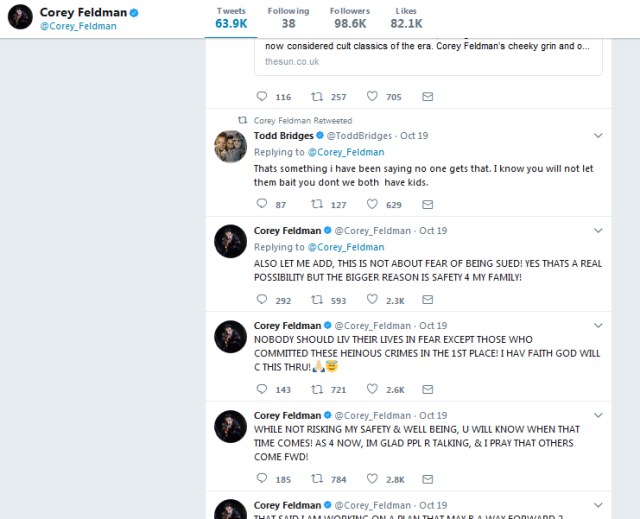 According to the text on the IndieGoGo page, Corey has entrusted someone he knows with “names and details” in case something happens to him before the film is produced:

“as a security measure Corey has already written down the names and details of the events and given them to a trusted person of power, in case anything should happen to him or any member of his family before the film is finished.”

Whether or not the film will be funded and finished is still unknown. If it is, only time would tell what the production value would be, and if the film itself could actually have a transformational effect on Hollywood. If it manages to achieve that very ambitious goal, it may even embolden victims of other types of elite pedophile rings to come forward as well.

Either way, Feldman should be commended for his efforts, as he’s going up against a leviathan to expose a secret so dark, implicated parties could be plausibly able and willing to resort to murder to protect it.

As of this writing, the campaign has received about $26,000 in donations since being posted yesterday.

← Who will be the Most Powerful Person in the World?
China’s New Era Under Xi Jingping →

79 Studies expose mask failures and risks HERE. SCROLL WAY DOWN Many Links Below – Become Informed! Feel Free To Pass On Any Posts – Pen Pensamiento Peligroso writes the truth as he sees it, and if it upsets you, then it makes you think! http://www.touchstoneconnect.com Subscribe for free – no ads! THERE ARE  25 […]

Dr. Peter McCullough an establishment physician exposes COVID 19 and vaccine fraud HERE. He’s hard to refute, but he’s easy for the bought and paid for corporate media to ignore. SCROLL WAY DOWN Many Links Below – Become Informed! Feel Free To Pass On Any Posts – Pen Pensamiento Peligroso writes the truth as he […]

Spike protein details HERE. SCROLL WAY DOWN Many Links Below – Become Informed! Feel Free To Pass On Any Posts – Pen Pensamiento Peligroso writes the truth as he sees it, and if it upsets you, then it makes you think! http://www.touchstoneconnect.com Subscribe for free – no ads! THERE ARE  25 LINKS AT THE BOTTOM […]