As Predicted: Jeffrey Epstein Appears to Be a Blackmail Agent for Deep State Intelligence Operators

With the new arrest of Jeffrey Epstein, the sequel to our Pizzagate series and book — Pizzagate: The Complete Story — is writing itself.

Based on evidence coming out since Epstein’s latest arrest, my thesis from the very beginning that Epstein is a blackmail operative for shadowy deep state intelligence operators appears to be correct. Some of the most compelling pieces of evidence were revealed as a result of news coverage revisiting Epstein’s sweetheart plea deal.

pointing this out were rightly outraged that Trump would hire Acosta after brokering such a controversial deal, and one that violated federal law by not including Epstein’s victims in the approval. However, it has now been revealed that during his interview for the Trump administration job, the topic of the Epstein controversy was raised. Acosta’s explanation for the sweetheart deal was completely remarkable:

Epstein, Acosta claimed, was an intelligence operative or asset of some kind, and therefore needed to be let off the hook. Someone important informed Acosta that Esptein was “above his pay grade,” so to speak, and to let him off the hook and let it go. The answer apparently satisfied Acosta’s interviewer, as he was granted the Labor Secretary post soon after.

This was all revealed in the Daily Beast, in an article by Vicky Ward. Ward is a mainstream investigative journalist who covered Epstein for Vanity Fair in 2003 — a time when almost no one knew who Epstein was, outside the movers and shakers of the world. Confirmation of the intelligence connection lends incredible support for my theory, made years ago, that Epstein runs an ultra-elite blackmail operation.

So someone in a position to have knowledge of the matter has admitted that Jeffrey Epstein works for “intelligence.” But what intelligence service does he work for? What does he do for them? And where does all his money come from? We may never know the answers to these questions. However, I first made the blackmail prediction based on the evidence of cameras found all over Epstein’s Palm Beach mansion during the raid that led to his first arrest. This was the same mansion where, ominously, they found a full suite of functioning dental equipment in one of the bathrooms.

As a side note, Ward has claimed that Vanity Fair editor Graydon Carter, who oversaw the profile she wrote on Epstein, cut a deal with the billionaire to have allegations against Epstein to be removed from the article. Epstein reportedly visited Vanity Fair offices and, after meeting directly with Carter, it was explained to Ward that editing out the allegations from the article was a prerequisite for publishing it.

After Epstein’s latest arrest, Carter has claimed that he determined that part of Ward’s article “wasn’t credible,” and that was why it was cut. Ward claims Carter told her Epstein was “sensitive about the women,” whatever that means. It isn’t clear how Epstein being “sensitive about them” could possibly be construed as a journalistically actionable reason to exclude their perfectly credible stories of abuse.

Ward herself also reported feeling threatened by Epstein while she was working on her report. According to Democracy Now!, Epstein once told her that if he didn’t like the content of her profile, “If I don’t like this piece…something is going to happen to your unborn children.”

There may be clues to Epstein’s intelligence connections lying in female procurer of victims, Ghislaine Maxwell, and her father, British publishing tycoon Robert Maxwell.

Robert Maxwell, Ghislaine Maxwell’s deceased father, was a a newspaper tycoon owning the company that publishes Britain’s the Daily Mail. And according to Pulitzer Prize-winning investigative journalist Seymoure Hersh, he was connected to Mospasad and possibly other intelligence services.

Hersh alleges in a book that Nicholas Davies, foreign editor for Maxwell’s flagship newspaper, helped arrange a deal to sell Israeli arms to Iran. He also allegedly helped Israeli agents kidnap a nuclear technician. These are remarkable charges for the foreign editor of a major paper, but in the context of the Epstein case, they become even more disconcerting.

Maxwell allegedly robbed his companies’ pension funds to shore up Mirror Group shares and prevent bankruptcy. The pensions were eventually funded again from multiple sources, including the British taxpayers.

Maxwell was under investigation for war crimes shortly before his death. His death was also mysterious – was cruising the canary islands on his yacht when he was reported missing by crew. His body was later found in the ocean, and investigators determined that he suffered a heart attack and fell overboard. Rumors abound, of course, that it was an assassination.

Prosecutors in Epstein’s case say investigators found an expired, phony Austrian passport showing Epstein’s photo but someone else’s name. The passport listed an address in Saudi Arabia for the alias. Epstein’s lawyer’s claim the passport was meant to hide his Jewish faith from potential hijackers in Middle Eastern countries

We also know that Epstein has rubbed shoulders with Ehud Barak, the former prime minister of Israel. Just how deep the friendship goes is uncertain, but more may be revealed as the saga continues.

Epstein knows he can’t get away with as soft a sentence as last time, so he’s offering to name names of people who participated in the ring in order for a sentence of no more than five years. Clearly, this is a scheme to name a few low-level pawns to sacrifice to ensure that the real dominos never have to fall. As a result, Epstein – the most promising key to unraveling Pizzagate – will ensure the real centers of power can continue their perverse operations unabated.

The other theory, of course, is that Epstein will name Trump as one of the individuals involved. This way, even fewer pawns need to be sacrificed, and the Never Trump deep state achieves their goal of removing and imprisoning the president. However, given some of Trump’s past comments, this seems unlikely. It also would be an incredibly dangerous move to expose Epstein, the key to unraveling the global pedo-blackmail system, with the hope it’d also take down Trump.

For example, when asked about Bill Clinton in interview from the early aughts, Trump speculates that Clinton might have “a lot of problems coming up” with regard to “the famous island, with Jeffrey Epstein.” This was a reference to the island where Epstein has hosted dozens of heads of state, members of royal families, and other luminaries for parties that might have included sexual activities with underage girls.

Even if Acosta didn’t lay out the bombshell, as reported by Vicky Ward, that epstein is an intelligence guy, hedge fund managers themselves had never heard of anyone who traded with Epstein. It’s just not possible to make hundreds of millions of dollars with a hedge fund that no one on Wall Street has ever interacted with. And reacting to a now-viral tweet laying out the blackmail theory form Twitter user @quantum1, hedge funders spoken to by a reporter at The Intelligencer are fully on board with the blackmail idea.

Other Epstein experts agree. Vicky Ward and other sources have also remarked that friends of Epstein’s felt less to them like friends, and more people that he controlled. There was a sort of fawning dynamic that always seemed to happen…Epstein victim Virginia Roberts has said that Bill Clinton was once at Epstein’s mansion because Clinton “owed him a favor.”

A hedge fund manager with no clients, friends in intelligence, mansions rigged with cameras, and seemingly infinite money…it’s no wonder the blackmail angle is now being looked at as a credible theory. All we can do now is watch with bated breath as the case unfolds. 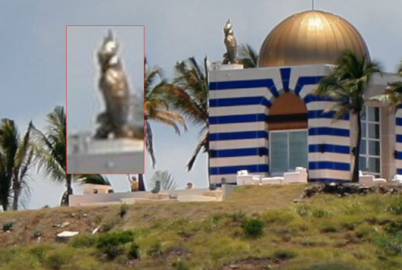 It’s absolutely incredible that the “conspiracy theory” I put forth years ago, when I dug into Epstein as part of our Pizzagate series, is now being discussed seriously in mainstream news outlets. Back then, hardly anyone had ever heard of Epstein. Now, he’s a household name — and although I don’t have a lot of confidence that his arrest will bring down an international pedophilia cabal, I most definitely think that Epstein is the key to doing so.

After all, even Epstein’s mysterious “temple” is now being discussed by Average Joes now that Epstein is the focus of a media blitz.

Epstein is the lynchpin between the estoeric pedocracy that is still widely considered a “conspiracy theory” and the day-to-day “real world” we appear to live in: a centrally-planned hallucination one where movers and shakers are controlled through blackmail by a mysterious cabal hiding in plain sight.

Leave a Reply to Ace of Swords Cancel reply

Joe Rogan gets well after taking Ivermectin HERE. Hey, it’s not “APPROVED” by the FDA. BFD! Who cares about the bought and paid for lying FDA? Aw, and Pfizer, Astra Zeneca, Moderna and J & J will not make any profit off of it. Ivermectin doesn’t kill anyone, and it’s been awarded a Nobel Prize […]